BY ALL OUTWARD appearances, the Boston Herald continues to chug along under its new ownership, with its hard-working reporters churning out solid stories amidst the demoralizing departure of co-workers from the newsroom’s already depleted ranks. 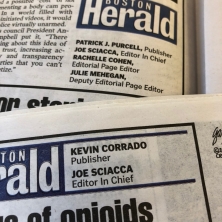 But an intriguing mystery about the paper’s editorials has arisen. Though newspaper editorials are traditionally unsigned, they reflect the views of the editor of the page, who is often listed on a newspaper’s masthead. In the three weeks since Cohen and Mehegan left, however, the masthead has listed no editorial page editor.

The dish: “According to sources familiar with the situation, Cohen was not offered a position but Mehegan was and accepted it, presumably putting her in line to run the editorial page as a solo operation. At the time of the mid-March ownership change, however, Mehegan was offered a communications position with the Baker administration and opted to take it and leave the Herald along with her longtime boss.”

To much applause in the Twitterverse, we might add. 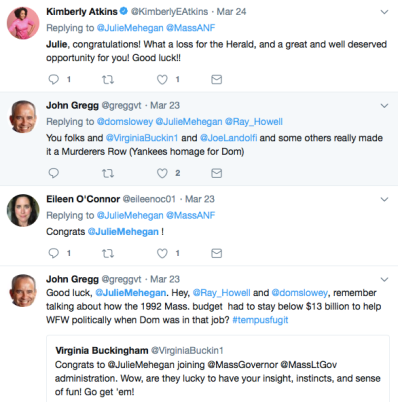