The clearcutters at Digital Worst – sorry, First – Media are at it again, engineering a Memorial Day Massacre at Fargo Street, according to Greg Ryan’s report in the Boston Business Journal (tip o’ the pixel to @EBMason).

Digital First Media, the new owner of the Boston Herald, laid off at least six employees on the commercial side of the newspaper on Friday, according to a union representative.

A marketing manager and automotive sales manager were among those who lost their jobs, as were a receptionist and three employees in the paper’s financial services department, which handles billing and other tasks, said Donna Marks, a Herald employee who took over as president of the Newspaper Guild of Greater Boston earlier this week.

The cuts come in the midst of a steady exodus of Herald staffers who had survived Digital First’s original bloodbath right after it purchased the shaky local tabloid. (See our Hexit Watch™ for a partial list.)

Sad as it may be, what’s happening at the Herald is very much newspaper business as usual according to this piece by Bloomberg’s Gerry Smith.

Several hedge funds have become newspaper barons in recent years. Alden Global now owns about 60 daily newspapers through a subsidiary, Digital First Media. New Media Investment Group, which is managed and controlled by private-equity firm Fortress, owns almost 150 newspapers in smaller towns like Columbus, Ohio, and Providence, Rhode Island, through a unit, GateHouse Media. And hedge fund Chatham Asset Management LLC is one of the largest shareholders and bondholders in McClatchy Co., publisher of the Charlotte Observer and Miami Herald. 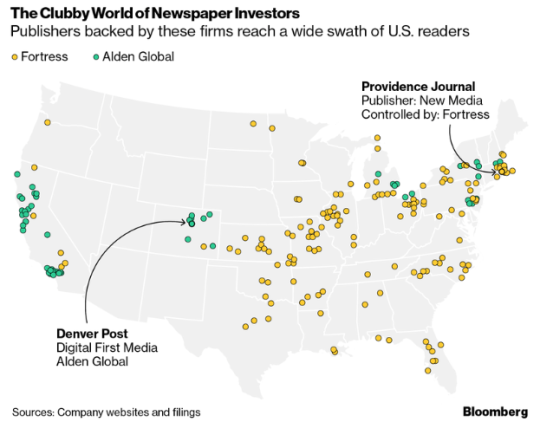 Smith adds, “’They’re not reinvesting in the business,’ Ken Doctor, a longtime newspaper analyst and president of the website Newsonomics, said about Alden Global. ‘It’s dying and they are going to make every dollar they can on the way down.’”

Two certainties at the Boston Herald: 1) They’ve got company at over 200 other U.S. newspapers, and 2) They all face the same future of death by a thousand paper cuts.

While the sad reading staff was chronicling the exodus of former Boston Herald Deputy Editorial Page Editor Julie Mehegan from Fargo Street to the State House corner office, we noticed this in her Twitter feed.

That would be Herald reporter Owen Boss, who’s listed as such on the paper’s website.

Except here’s what we found @OVVenBoss.

Owen Boss has departed the skimpy local tabloid and landed at WHDH.

The exodus from the Boston Herald since its sale to Digital First Media (slogan: “Where Newspapers Go to Die”) hasn’t yet reached Biblical proportions, but it does seem to be picking up. 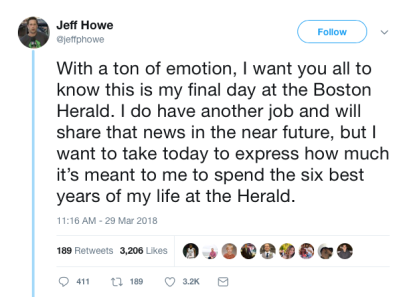 Crosstown at the Boston Globe, sports media columnist Chad Finn has a piece today about “The Athletic sports website . . . filling out its Boston roster.”

Among those who will be writing for The Athletic Boston are Fluto Shinzawa, who is leaving the Globe to become the site’s Bruins writer; Jen McCaffrey (currently MassLive) and Chad Jennings (Boston Herald), who will cover the Red Sox; and Jay King (MassLive), who will be the Celtics reporter. The site’s Patriots hire will be evident in the coming days.

At the time Digital First won the Herald bakeoff and proceeded to lay off about 30% of the staff, one of the most appealing aspects of the scanty local tabloid was its robust and popular sports pages. But now the paper is printed in Rhode Island so home subscribers get yesterday’s scores tomorrow . Combine that with sports page stalwarts like Howe and Jennings leaving Fargo Street, and the Herald’s appeal is basically reduced to the days Howie Carr’s not writing.

Beware of the buyer.

The shaky local tabloid’s future must be flashing before its eyes thanks to the slow-motion dismantling of the Denver Post by owner Digital First Media, which is in the closing days of its Herald purchase.

From the Post’s own story:

Thirty jobs will be cut from the newsroom of The Denver Post in the coming months, Editor Lee Ann Colacioppo told her staff on Wednesday.

“These job losses are painful, and we know meaningful work will not get done because talented journalists have left the organization,” she said in a memo sent following a newsroom meeting. “I’m sure some commenters will cheer what they believe is the eventual demise of the mainstream media, but there is nothing to celebrate when a city has fewer journalists working in it.”

Do we detect a note of bitterness there? Well, that’s nothing compared to how pissed off they are at News Matters, “a news guild project for Digital First Media workers.” 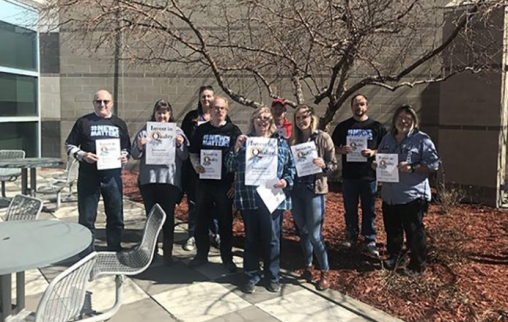 “A legal looting of the public trust.”

Nearly a third of the Denver Post’s newsroom will be laid off, management told staff Wednesday as the paper’s hedge fund owners continue slashing jobs to maintain high profit levels.

“The Denver Post had its heart ripped out Wednesday when the company announced layoffs of 30 Newsroom employees – 25 workers and five managers,” the Denver Newspaper Guild said in a statement.

“The layoffs are driven by owner Alden Global’s greed and its desperate attempt to recoup more than $130 million in investment losses from the Fred’s Pharmacy fiasco,” the statement said.

For more on Alden Global’s lack of investment proficiency, see here. Pete Vernon at Columbia Journalism Review’s The Media Today has more on the hedge fund’s “pattern of gutting newsrooms and selling off valuable office space to squeeze profit from the industry.”

From the looks of it, anyone searching for office space on Fargo Street should call Digital First first.

Since last month’s announcement that Digital First Media had won the Boston Herald auction bakeoff, there’s been a steady drumbeat of prebituaries for the shaky local tabloid.

The Boston Globe’s Jon Chesto and Andy Rosen predicted a rolling thunder of staff reductions, while Nieman Journalism Lab director Joshua Benton said flat-out “to be owned by Digital First is to be gutted.”

Now comes this piece (tip o’ the pixel to MASSterList) in The American Prospect by Hildy Zenger, which is the pen name (Hildy for Hildy Johnson, Zenger for John Peter Zenger) of “a writer who works for a newspaper owned by a private equity firm”).

Just before Robert Kuttner and I filed our American Prospect article on the rape of the newspaper industry by private equity predators in December (“Saving the Free Press from Private Equity”), the prime nemesis of our story, GateHouse Media, bid $4.5 million to buy the 171-year-old Boston Herald, which declared bankruptcy the same day. The deal was conditioned on voiding union contracts and deep-sixing legacy pension, health, and other obligations. “Major layoffs in the newspaper’s 120-person newsroom are a certainty,” we wrote, in the context of GateHouse’s dismal record of gutting editorial staffs at its 770 daily and weekly newspapers.

But GateHouse was then elbowed aside by Digital First Media, whose $11.9 million bid won the February 13 bankruptcy auction in Boston, indicating that the DFM bean-counters have calculated a more profitable but probably even bloodier endgame for the venerable Herald, whose days are now surely numbered, according to industry observers.

The estimable newspaper analyst Ken Doctor “predicted that DFM would get its money out of the deal within three years at most, then declare bankruptcy and sell off the emaciated remains of the business for whatever they can get for it.”

From our newly minted Hexit Watch™

The inevitable exodus from Fargo Street has mostly proceeded under the radar, but here’s a significant departure: Former Deputy Managing Editor for News and Multimedia Zuri Berry has hied himself to Charlotte, NC. From his Twitter feed: 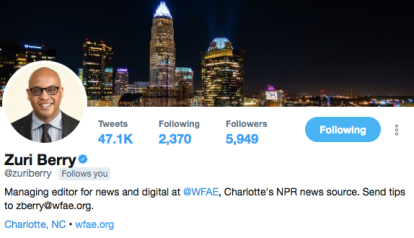 Best of luck in the Tar Heel State, Zuri.

For those of you keeping score at home, there’s now another suitor – and potentially more ominous news – for the beleaguered Boston Herald.

Brian Dowling reported in today’s edition that a possible third bidder is kicking the tires on Fargo Street.

Digital First Media is interviewing editors at the Boston Herald in connection with a potential bid to buy the newspaper.

Mike Burbach, an editor at the Pioneer Press in Minnesota, a Digital First publication, told managers at the Herald yesterday in an email from his newspaper account that he and other representatives of MNG-BH Acquisition LLC will be “coming to your offices” this coming week to conduct interviews.

That would be the same Sentinel & Enterprise the Boston Business Journal just reported is going virtual.

Next month, for the first time in 180 years, the daily Fitchburg Sentinel & Enterprise may no longer have a physical office in Fitchburg.

The newspaper, which is owned by Denver, Colorado-based Digital First Media, is switching to what it’s calling a “virtual newsroom” model by the end of February or sooner. Jim Campanini, editor of the Sentinel and Enterprise and the Lowell Sun, told the Business Journal in an interview that the plan is intended to save money, but that the paper is in no danger of closing entirely. In fact, he boasted that the paper just hired a new reporter as well as two videographers.

“It’s our time to create this model of innovation,” Campanini told the BBJ’s Don Seiffert. “I look upon this as discovery. We’re explorers, really.”

Swell. But do they have a compass?

Regardless, the redoubtable Dan Kennedy of Media Nation told the BBJ he’s heard worse ideas. “Cutting rent is certainly better than cutting staff,” he said in an email.

The question is, if Digital First buys the Herald, would Fargo Street become a teardown too?