Chalk up another significant departure from the shrinky local tabloid. 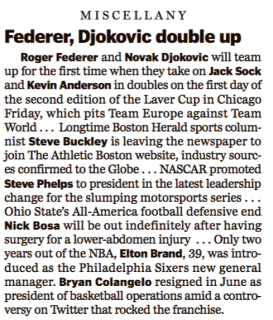 That was soon followed by this Chad Finn piece on the Globe’s website. 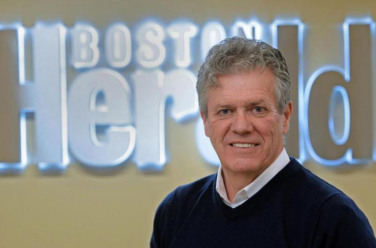 Buckley, 62, has been with the Herald since 1995. Before joining the Herald, he wrote for The National sports daily among other outlets.

A University of Massachusetts graduate, he has made frequent appearances on Boston sports television and radio throughout his career, and has authored several books, including Wicked Good Year on the 2007 seasons of Boston’s major sports franchises. He is also the founder of the annual Oldtime Baseball Game in Cambridge.

As WEEI’s Alex Reimer noted yesterday, “[w]ith Buckley now presumably out the door, the Boston Herald is left without any general sports columnists.”

The “presumably” is there because, Reimer wrote, “Buck, annoyingly, wouldn’t confirm the news to me in a text message. Perhaps that’s his revenge for spending so many hours with me inside of a radio studio.”

Coincidentally, the scraggly local tabloid did announce an addition to its sports desk earlier this week. 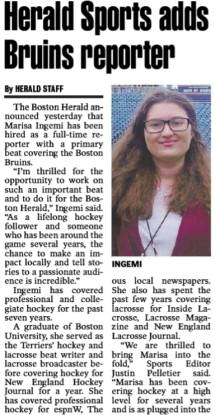 Good luck to Marisa Ingemi boarding the Good Slip – sorry, Ship – Herald, and bon voyage to Steve Buckley, a true pro and a real loss for the shaky local tabloid.