As the sadreading staff has noted, hedge fund baby Digital First Media (slogan: “Where Newspapers Go to Die”) is dismantling the Denver Post in slow motion.

The Denver Post is begging to be saved — quite literally. On Sunday, the newspaper will print a package (here’s a landing page with the different pieces) centered around its survival. At the center will be a piece by the newspaper’s editorial board lamenting “marching orders to cut a full 30” 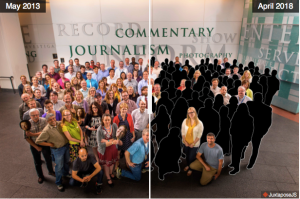 staffers by the start of July, and laying much of the blame at the feet of its owner, NYC hedge fund Alden Global Capital.

It’s a remarkable piece, one in which The Post’s editorial board goes as far as to say, “If Alden isn’t willing to do good journalism here, it should sell The Post to owners who will.” The board also laces into Alden’s “cynical strategy of constantly reducing the amount and quality of its offerings, while steadily increasing its subscription rates,” and says, “Coloradans feel the insanity of it in their bones.” Read the editorial in its entirety here...

The CNN piece closes with this:  “Alden’s gutting of local papers is coming under increasing scrutiny…”

That would refer to this Bloomberg News piece.

As Bette Davis might say, it’s going to be a bumpy night(mare).